I know that's not a real name, but that's the only name I have. That's what everyone here calls me. "Boy, feed the camels. Boy, sweep the tent. Boy, play the drum."

I'm not complaining. My mother threw me away - she couldn't be bothered about a name! At least Master Melchior found me and somehow kept me alive. He feeds me, he gives me a place to sleep, he even allows me into the observatory at night when they study the stars. I keep his rooms clean, I wash his clothes, I serve his food. And he's never hit me, unlike the other masters around here. When I talk to their servants, I know I am lucky to have Master Melchior.

The night when that new star appeared I was in the observatory, sitting in my corner, observing the scholars, trying to learn as much as possible from them. I liked the stars, but how they could read. so much from the heavens was way above my knowledge. But who knows, if I listen and watch - maybe one day I'll understand.

They were huddled over their scroll, discussing something, arguing as always, when Master Melchior looked up at the sky. He stopped right in the middle of his sentence, which was not at all like him. For a moment he just stared at the sky, at then he started screaming, pointing into the night sky. "A star! A star!"

His companions whipped their head upwards, as did I. High above us was a star, a very bright star, where none had been earlier in the evening. Everybody started talking at once. I pressed into the corner and stared up into the darkness, but all of a sudden it wasn't so dark anymore. The star shone with a brightness I had never seen before.

People came running from everywhere. Soon the shouting spread into the town. It was chaos, even in the observatory. Master Melchior summoned his guards, barked orders, and soon order was restored. By sunrise things had calmed down a bit, but people were all around, staring at the sky and talking non-stop.

A week later two caravans rode up to the observatory. It was two colleagues of Master Melchior from distant lands. I had to cook up a storm, serve them, prepare baths, and run a hundred errands. The three spent the night in the observatory, making measurements, studying their scrolls, and arguing. Lots of arguing, but over and over they kept saying "A great king". From what I could understand, the star showed them that a great king had been born in a faraway land. The big question was what they should do about it. Finally, after much deliberation, Master Gaspar slammed his hand on the table and shouted: "Enough! No more talking! We have to go!"

Normally Master Melchior takes days to organize a caravan, but not this time! Late the following afternoon we set off. Yes, of course I went along! Who else would play the drum to keep time for the camels?

I wish I could tell you adventure stories about our journey, but in fact it was quite boring. Day after day just plodding through the dust, beating my drum, sleeping close to our lead camel to protect myself from the sand. But eventually the sand made way for more solid ground, and soon we were in Jerusalem. We even spent a night in the king' palace, and even little me got a bed in the servants' quarters. And such nice food!

Early the next morning we were on the road again. There was tension in the air. Not much talking. Master Melchior seemed nervous, which was quite unlike him. Master Balthasar was mumbling to himself, as if he was rehearsing a speech. By this time I had figured out that we were going to visit a great new king that was born, and I could see that my royal masters were very nervous about this meeting! Normally people bow to my masters, and they have come to bow to this new king - he must be a really great king.

As we neared the little town the new star seemed to be shining brighter. The masters entered into some discussion, took out their instruments and made some measurements. "Straight ahead," Master Gaspar said, and we resumed the slow walk. Only to stop at the outskirts of the town, and even right on its little town square, for more measurements. But finally we arrived at a little house. Not a palace, just a little house in a side alley.

My masters dismounted without a word and started smoothing down their rumpled robes. They seemed reluctant to approach the house, but finally Master Melchior stepped up and knocked on the door. Almost at once a young woman opened the door. She didn't say a word, just looked at us and smiled.

Master Melchior dropped to his knees, as did the other masters and us servants. "Ma'am", he said reverently. "We have come to see the king. We saw his star when it arose, and we have come to honour him."

Still smiling, she motioned to us to get up and enter the house. It was almost comical, the careful way my three masters shuffled through the door, as if they were afraid of what was inside. In truth, there wasn't much inside. These people were poor. Not as poor as this little drummer boy, but close. I saw only a few bits of old furniture. A man. And a baby.

The moment they saw the baby, the masters were on their knees, faces to the ground. So was I.

There was just something about this child, something beautiful, something I had never experienced before this day, and yet I felt as if I had searched for it all my life. It was as if he was reaching out to me in some unknown way, looking deep into my soul with those big luminous eyes. As if he saw only me - the little drummer boy with no name. As if he was glad to see my dusty face. It felt...as if I was coming home.

Far away I heard the voices of the masters. As if in a dream, I saw them unwrapping their gifts, laying their precious gold and frankincense and myrrh before him. A tear trickled down the mother's face. Her husband put his arm around her shoulder, but there were tears in his eyes too.

I wanted so badly to give a gift to this baby king. Just being in his presence was an honour I didn't deserve and would never forget. And I had nothing to give him. I had nothing in this world but worn clothes and a battered little drum hanging at my side.

Back in our home town I had practiced playing the drum, not just keeping time for camels. I had dreamed of playing in a parade, maybe for some important person, all the while knowing that it would never happen. And here I was, standing before the great king.

Slowly, softly, I started playing. Master Melchior turned to me, but the king's mother raised her hand to stop him. I played on.

The baby looked at me. He smiled. And I knew, at last, I have found a friend! 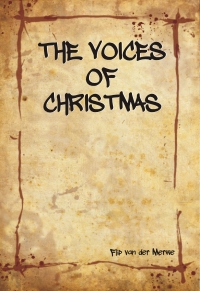